The Research on the Friction Properties of Bamboo Fiber Surface

The last column is the average of all test subjects for friction tests in five places on their bodies with average and standardised force. Each score includes deviation for each test. Materials of interest are nylon and the cotton sock. 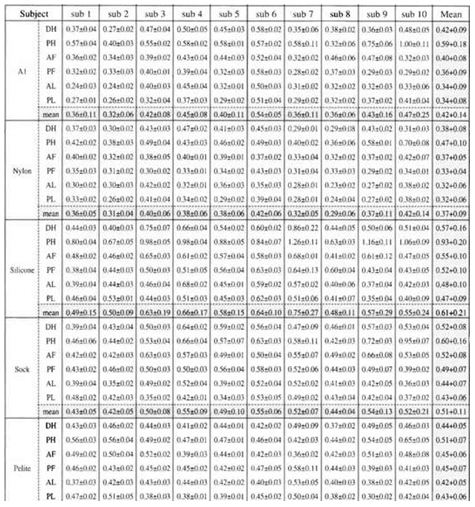 The measured friction coefficients are listed in Table 3. For all fabrics, no significant difference in skin friction was found between the two investigated age groups (P>0.27, Fig. 2).

Sliding friction measurements were carried out using a quartz force plate (Model 9254, Kistler, Winterthur, Switzerland), as described recently in detail (19). The subjects were instructed to rub their dominant inner forearm in a reciprocating and uniform motion (≈20 cycles) against the textiles on the force plate. The average normal load of all subjects was (14.6 ± 1.3) N, which reflects individual normal load variations ranging from 11 to 19 N. The mean dynamic skin friction coefficient (COF) obtained from at least 15 full friction cycles was calculated by the ratio of friction force and normal force, and used for further statistical analyses. Before the friction experiments, the apparent contact area between the skin and the force plate was determined using a pressure-sensitive film (19). The applied normal loads and friction frequencies [frequency=(0.84 ± 0.23) Hz, estimated forearm stroke ≈80 mm] resulted in an average contact pressure of (4.0 ± 0.7) kPa, and mean linear sliding velocities of about 135 mm/s, representing clinically realistic contact conditions for supine persons (31).

Breathabilility according to moistness (done with hospital grade polycotton) – this graph shows that damp skin is far worse off: 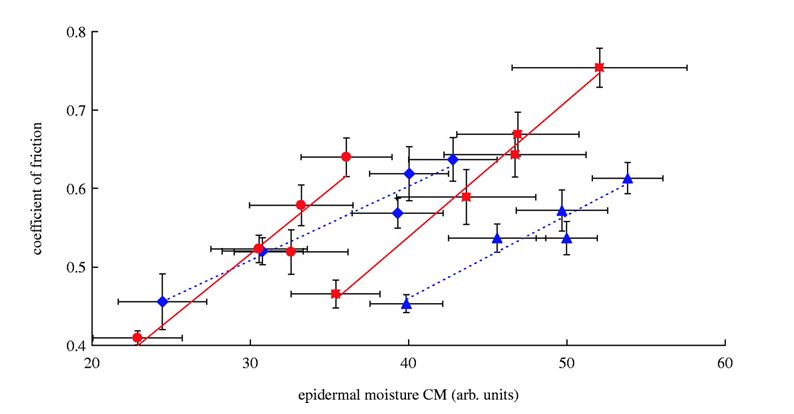 Bamboo fabric's capillary action – aka wicking – means it will remove excess moisture from skin, providing breathability which also reduces the friction co-efficient on skin as shown above.